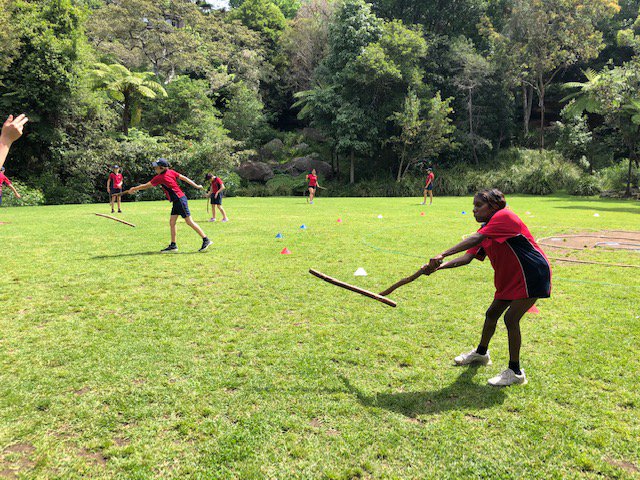 NAIDOC Week is an Australian observance normally celebrated during the winter break. NAIDOC stands for National Aborigines and Islanders Day Observance Committee. It has its roots in the 1938 Day of Mourning, becoming a week-long event in 1975.

This year, due to COVID-19, it was moved to the week 8-15 Nov and also celebrated at Glenaeon through the Year 9 PE session.

NAIDOC Week celebrates the history, culture and achievements of Aboriginal and Torres Strait Islander peoples. NAIDOC is celebrated not only in Indigenous communities, but by Australians from all walks of life. As we are all normally on holiday we took the initiative to celebrate it in October being very happy to have Beniah as an indigenous student in our cohort. So we honoured her peoples’ achievements in the form of talking about and looking and trying out activities with an indigenous background.

The students talked and reflected on what they knew of indigenous activities in the community and learned about physical activities and games mostly deriving from the hunting days.

Beniah and her fellow Year 9 cohort students were excited to be on the oval and involved in games and activities using throwing sticks (woomera) in two distinctly different activities. The first one, Kalq, a fighting game in which indigenous people used blunt javelins/spears, while we used the woomera sticks for a safer approach. Two students stand opposite one another and one throws their stick at the other while the second one tries to defend themselves against being hit. A challenging game that required a good eye, quick reflexes to dodge and also care and consideration when in the position to throw the stick and not to throw it too hard to inflict injury.

The second activity was a team event in which two tribes, the students gave their team indigenous names, and had to throw the woomera in dart-like large circles marked by ropes on the oval. Each circle had points much like in dart win which the smallest inner circle has the highest points 50, the outer most circle 10 points. Teams had to add up all team points to determine the winner.

A reflective circle sharing followed at the end in which the students sat together on the grass, appreciating the perspective into indigenous lives through sport and asked if they could learn more about it. Beniah, in her own modest way, felt appreciated and valued through the discussion that was so close to her heart.