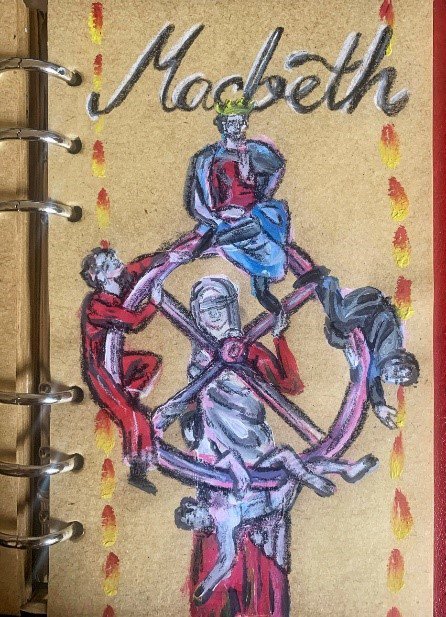 In English this term, Year 10 students have been studying the beautiful language in William Shakespeare’s play Macbeth. Ms Rees’ class wrote some 100-word pieces of Flash Fiction inspired by the play’s desolate setting.

Read Natalia Bennett’s creative response to the opening of Macbeth:

Scotland’s hills rolled out in front of Macbeth. The sky had succumbed to the inky clouds, fat and heavy with rain. An average day. Although, you’d think after a victory, a sliver of sunshine might make an appearance. Trees spotted the surrounding lands in clusters. They shadowed the ground from any sort of light. The vivid green of the country was as usual dulled. Frigid drops of water began to pat the ground, spitting on the soldiers’ faces. Even their helmets couldn’t keep out the cold, the metal stinging their bodies. Soon, the ground was spotted with puddles and mud, which splattered with the begrudging footsteps of the men. Wind snaked past the travelling group, sending freezing air to shake their spines. Home felt like years away.

Ms Gonzalez’ class started their study of Shakespeare’s play Macbeth with a consideration of the Medieval concept of the Wheel of Fortune. It was believed individuals symbolically rode this wheel throughout life as it was spun by Fortuna, the Roman goddess of Luck, Fate and Fortune.

In the context of 2020-2021, many students related to the sense of being spun by forces out of their control, from a position of comfort, into one of endurance. Yet it was reassuring to hear students overwhelmingly articulate an alternate worldview: one based on free will, thoughtful action and self-determination. So, while the wheel of fortune may appear to spin, there was agreement that we can also spin it for the better!

Discussions over whether the glass is half-empty or half-full returned upon encountering this bleak monologue by Macbeth:

Tomorrow, and tomorrow, and tomorrow,
Creeps in this petty pace from day to day,
To the last syllable of recorded time;
And all our yesterdays have lighted fools
The way to dusty death. Out, out, brief candle!
Life's but a walking shadow, a poor player,
That struts and frets his hour upon the stage,
And then is heard no more. It is a tale
Told by an idiot, full of sound and fury,
Signifying nothing.

But do Year 10 agree with Macbeth’s assessment of the futility of life??

Below is a response from student Oscar Street:

Yet even nothing is something
For tomorrow, and tomorrow, and tomorrow
Stroll at this placid pace from day to day,
To the last syllable of recorded time;
Not leaving a single moment unlived.
The way to a joyous newborn, whose candle is newly lit!
Life is the smiling face, a rich player
Who has nothing, but loves his hour on the stage,
And then is remembered by eternity,
for the actions he hath done. Life is a tale
told by a mother, full of interest and care.
Signifying all.