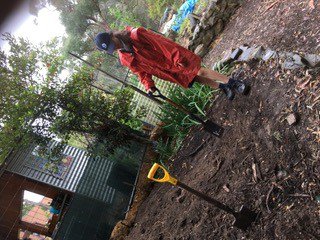 Marc Monnet-Demarbre is a Year 12 (Class of 2022) Agriculture Student. As part of his chosen course, he is required to undertake marketing of his project. In support of Marc's studies, we have made some editorial space available in our Newsletter. Watch for more updates to come on Marc's work in 2022.

Turmeric is a flowering plant that is part of the ginger family. The rhizomes are ground to make a spice used in cooking and it can also be used for dyeing. Turmeric is really important as a medicine for animals and humans. It was discovered that it possesses anti-oxidant, anti-inflammatory, blood thinning and anti-cancer properties.

It was decided to grow turmeric in the school garden for the second time. The turmeric can be grown on a hugel because it has richer properties than a normal patch of soil. Hugel in German means little mound. It is a German version of a compost heap. The hugel is comprised of 3 layers. The first is the hole in the ground full of sticks. The second is a mound above the ground full of straw and food scraps. The third is a layer of soil. The hugel then gets covered by a tarp to prevent animals from destroying it. The hugel only needs watering if it appears too dry.

To make the hugel you dig a massive hole in the ground where you will find good rich soil and fill it up with logs and sticks which will then decompose. Next all the gaps are filled with soil and compacted making sure that there are no air gaps. That is vital to the performance of the hugel. Leaves are then scattered over the top with more sticks and more dirt. This process is a delicate process. The least amount of air escaping will ensure the growth of fungi which will decompose the wood which makes the best hugel.

There is a hugel at Castlecrag and at Middle Cove. At Middle Cove we are growing turmeric again. This project is being worked on by Classes 3-6. Over the past few weeks we have been digging to make way for the second hugel. While doing so we encountered lots of sticks and the remains of the first turmeric crop that were left behind in the harvest process. We washed the turmeric under running water and scrubbed it down. We put it in a basket to dry out and shrink.

Each class enjoys a meal during gardening classes. The turmeric is used in some of the foods such as the bread made by Sandra and the stir fry and the tea drink. I will give you another progress update on our turmeric project in the newsletter next year.