The Power of Play in Nature 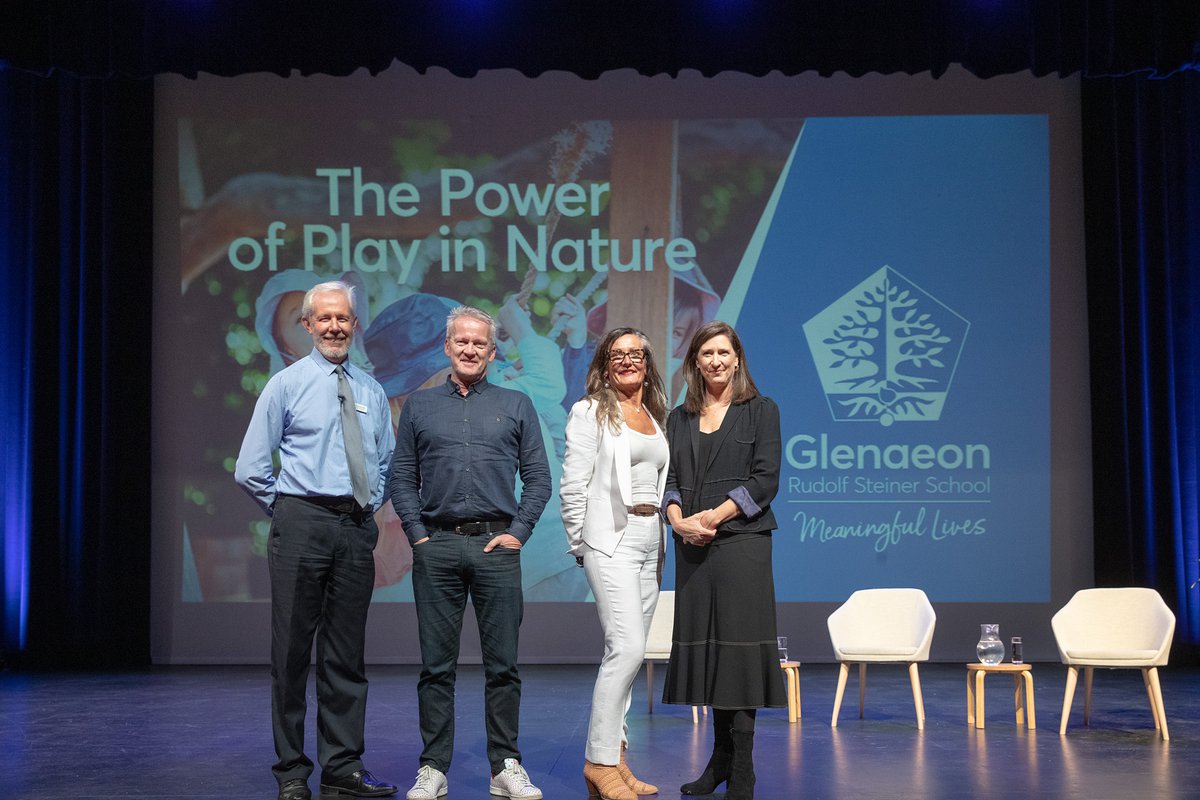 For those in the community that could not make our Power of Play in Nature forum last week, I am pleased to share my opening remarks.

"I’m very aware that I’m the warm up band at this gig, so I will be brief and just restrict myself to two key points. The first is why Glenaeon is hosting this seminar.

Education is continually changing. Just think student wellbeing. When I went to school, mental health and wellbeing were non-existent issues as core school concerns. If students couldn’t manage, it was seen as collateral damage to the main battle for academic achievement, like civilian casualties in a war. Now there has been a 180 degree turn around. Mental health and wellbeing are front and centre. Every school has an obligation to manage, support and facilitate student mental health. That transformation has happened in a generation.

Consider positive education. Some twenty years ago, I and my school were criticised by a mainstream teacher from a university for being “too positive”. This was about the year Professor Martin Seligman’s first book The Optimistic Child came out. Now just think what Seligman’s Positive Education has become. Today there are many schools which have based their entire wellbeing program on Positive education, and there’s even one nearby that calls it Visible Positive Education. Twenty years ago we were criticised for using positive methods, today you are criticised if you do not use positive methods. That’s a total turnaround in twenty years.

How does change happen? It happens the same general way that positive change happens. First there are problems with the current model or the current understanding of what is generally understood should happen in schools. Cracks and internal contradictions start to happen; new expectations start to emerge. At the same time there is a growing body of research suggesting a new and better way.

Let’s look at our current model. Australia has spent more money on education in recent years than ever before. Australian children spend more time in formal school instruction than all other OECD countries: our school day is the longest in the OECD (something about which Australian parent may be very surprised!). Australian children begin formal literacy instruction at an increasingly earlier age: there is two years’ difference between us (age 5) and Finland (age 7).

Yet what are the figures showing us? Results in NAPLAN and PISA testing show at best a plateauing, at worst a decline in Australian student performance. The recent NSW government review of curriculum received submissions from almost all stakeholders that there is a perceptible decline in student engagement in learning and assessment, particularly in high school.

In other words, we are doing and spending more, and the results are getting less. That sounds to me like an internal contradiction! We need to do something differently.

Now the growing research. Over the past few years, there has been some fascinating research evidence gradually coming together on the value, the importance, the power of play, and particularly play in Nature.

Today’s seminar is about connecting the dots of this research. Sitting in front of me are two very impressive dots. Over the past few years we have been doing some espionage and quietly tracking the research coming out of Pasi and Tonia, and we’ve been deeply impressed about how they’ve been ahead of the curve in understanding and explaining and affirming, how and why play is so important for young children, and how it can improve the educational outcomes for which everyone is searching.

Today’s forum is about sharing this research. At Glenaeon we’ve been doing this for a long time, but today’s session is not about what we do. It’s about sharing the research, and bringing this important work into the public discourse on education. Every school, every teacher, every family, needs to work out how they will use this research in their own way, to understand it and to implement it in their particular context.

At the moment, and perhaps always, there is the tendency to reduce the complexities of schools down to single measures, to numbers which are easy to compare. But we want to talk about childhood, this unique and special time that is gone so quickly yet is a foundation for life.

Now the second point I’d like to make is to share very briefly the qualitative research our school has been doing over many years on what I’d call the inside story on play: what is happening inside the child when he or she plays. To illustrate I’m going to show some photos, but we need to bear in mind that pictures of children playing are often not very impressive to an adult eye. Why? Because there’s nothing there. The power of play lies in what the child has in his or her own mind, in their imagination. Children use the most ordinary things, but transform them, through their imagination, into something else.

So with this ordinariness in mind, let’s look at some pictures taken in our Kindergarten in the past few weeks. Here’s the first one: it’s a helicopter, a Rural Fire Service rescue helicopter, maybe water bombing or just rescuing people. The teachers tell me it went up and down quite a few times, in the children’s minds of course, but the game fell apart when there was a dispute over who was really at the controls (play teaches children a lot about conflict resolution!)

How impressive. Five year olds can’t really help in a national fire emergency, but they can play at helping. They can express their compassion and desire to help through play. Now this tells us something else. Children imitate what they see in the world around them, and they play it out. Play is their way of processing their learning about the world.

Let’s look at these other examples of indoor play. Here’s a band, obviously someone’s been to a concert and they want to play out what they saw. There’s the rhythm section down the front, and the star of the show is here playing a guitar, here being the horn section, and here doing a soulful Elton John on the keyboards. 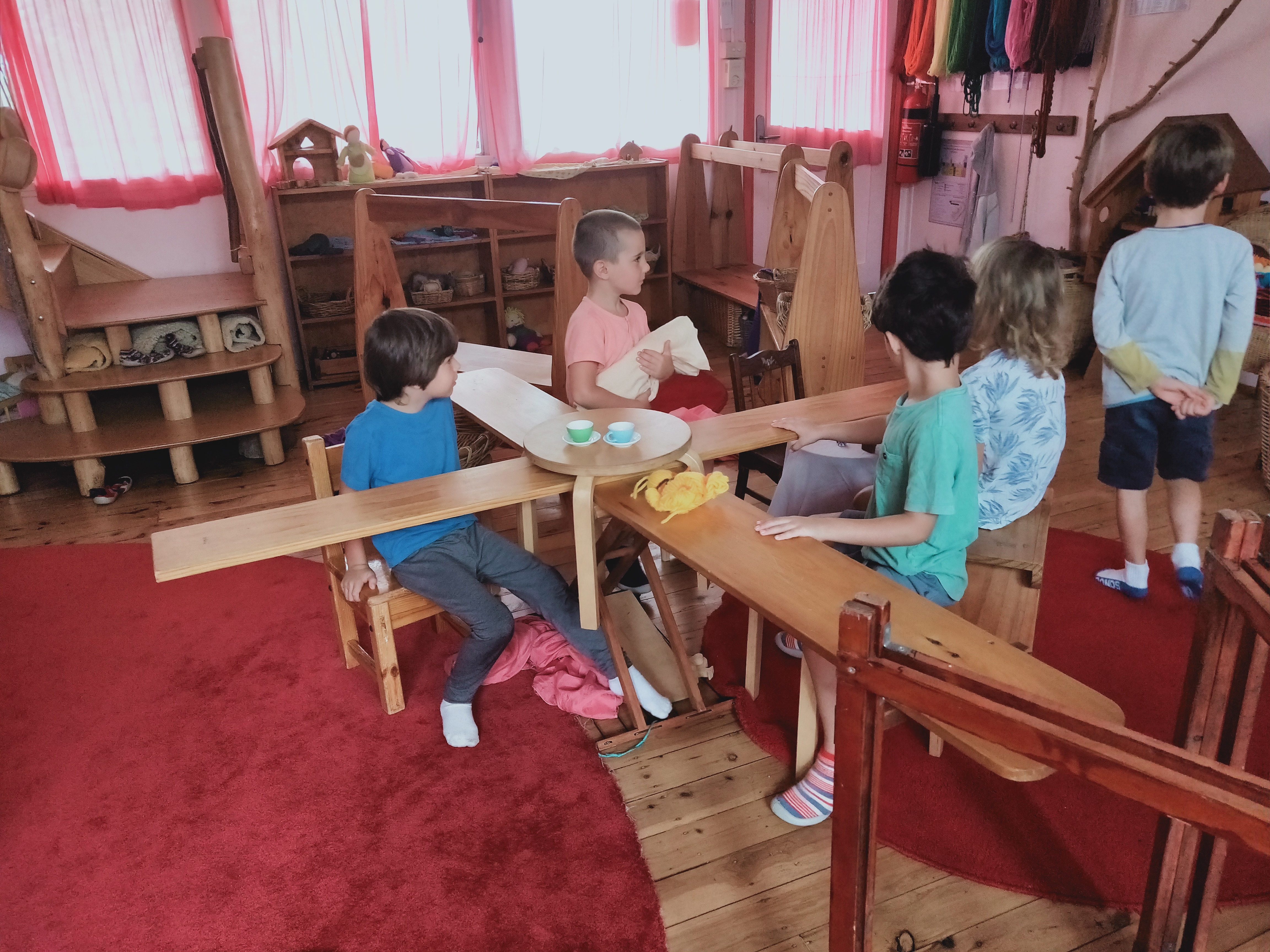 We’ve found that in play children transform the world. They take ordinary things and turn them into whatever the play demands: this chair could be a horse, a car, a police station, a fire engine, a space ship. To us it’s just a chair: it’s been defined and its possibilities have been fixed.

Let’s look at play outside, in Nature. One of the most common play themes in a Nature play area is building cubbies. Again, they don’t look like much, would pass no building inspection, and look like just a bunch of sticks piled up around trees. But to the children building them they can be a fort, a house, a castle, and a source of infinite satisfaction and delight.

You see, we become more boring as we grow up. The world becomes defined and fixed. Now it has to, so we can build bridges and hospitals and research labs and build them exactly. But childhood offers a unique perspective on the world, if we will allow it to flourish. It’s the time when we are most creative, when the world is filled with infinite possibilities.

And what’s most special is, it’s free!! There’s no charge to this most simple gift of childhood. Children can play with the most ordinary things and turn them into extraordinary things, without a cost.

What do they remember when they grow up? I was reminded of how powerful these memories can be when I met up with a former student. Dr Mia Westcott was educated entirely at Glenaeon, went on to study medicine, and is now a GP in a family practice in Newcastle. She’s now 32, and I caught up with her just a few weeks ago for a coffee. She told me about the impressive work she has been doing with aboriginal women via the Aboriginal Medical Service in disadvantaged areas of Newcastle, but as we reminisced about school, she reminded me of a retrospective she wrote four days before she left school in 2005, a piece which captured her memories of play in nature on the Middle Cove campus as a young Glenaeon student. Here are just a few lines:

In Year 3 we had a whole new playground to explore. The cubby houses were amazing feats of ingenuity, physics and a fair bit of luck…this was the year my friend Bonnie and I invented the playground currency of “pumpkins” (a prolific berry from one of the trees). This was an amazing discovery, and as we had invented it, we had a head start on collecting. Soon the other kids caught on, and we were trading all sorts of items, from cubby house locations, to old stuff from home…I admit, when (some) other girls (I knew) were listening to Hanson, The Spice Girls, and making their own pop groups, I was making mudpies with red berries on the top, stirring strange concoctions in an old tree stump, and trying to sell the stuff at my “café” (cubby). The many games we played, and the adventures we undertook in those primary years would take me pages and pages to relay, so I will stop now. However, I would like to say, they were the most amazing, exciting and boundless years, in which anything and everything was possible.

A time when “anything and everything was possible”. What a treasure to have such a foundation for life! This is the world of child’s play that we’re going to hear about from Pasi and Tonia. This is the Power of Play in Nature. Thank you for coming and enjoy the Forum."

Coming soon: The Power of Play in Nature seminar video.