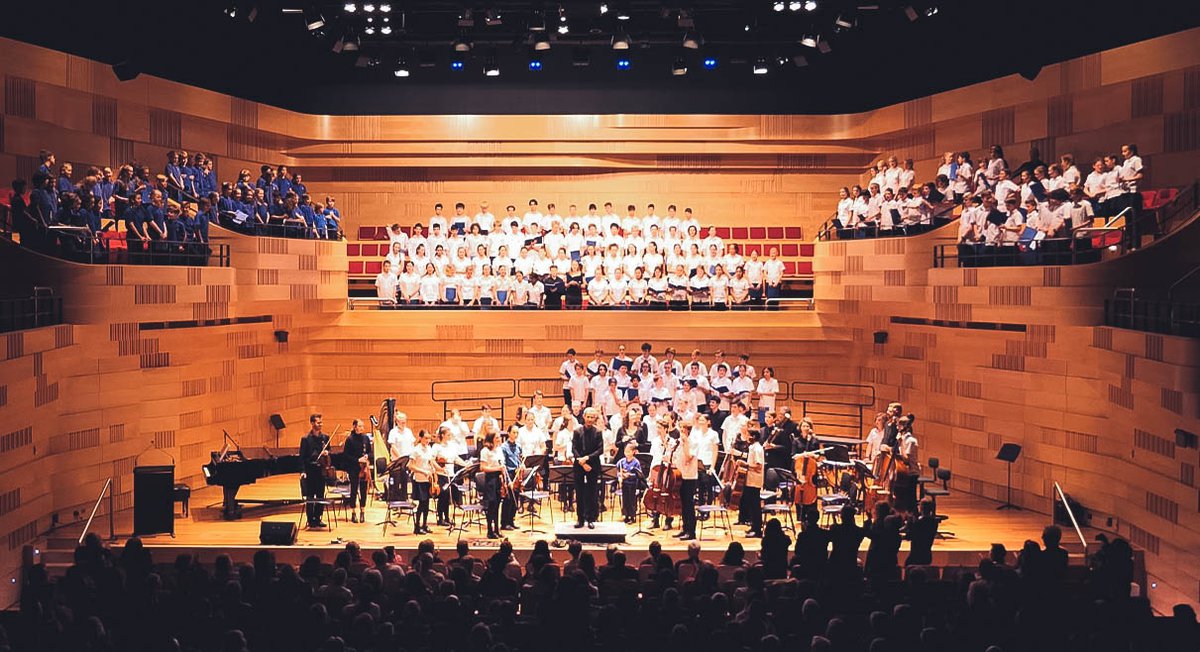 Our School Concert last Friday was a standout. Head of Music Christian Lillicrap deserves our warmest thanks and appreciation for leading such a committed and talented team of performers (students) and backstage organizers (teachers) to produce such a gift to our community.

Highlights? There were many, but in fact every item was a highlight in its own way. From the class choirs to the Chamber Strings, the Big Band, and the Year 10 band, they were all musically impressive and entertainingly fabulous. But the Beginners ensemble was an absolute gem. The sheer joy and pride of these students who have only been playing for six months, but could get up on stage and communicate their enthusiasm so unselfconsciously, was a joy to behold.

The finales to the two halves of the concert were the heart stoppers for me personally. Hearing our unofficial “School Anthem”, John Rutter’s For the Beauty of the Earth, is an ever enriching and moving experience, and it was again on Friday night. At the very end, the finale to Scriabin’s Symphony #1 for orchestra and choir was simply a tour de force. The grandeur and magnificence of the music, bringing together every student from Class 5 to Year 12, left the audience powerfully affected.

I received an email this week congratulating Christian and the school on the concert, and I will quote directly from it as it captures what so many parents felt:

I was sitting with a German friend whose daughter goes to an elite school here in Sydney and she said she could not believe this was a school concert. The standard seems so much higher. I agree wholeheartedly…. This was more than a “school concert”. It was a really good night’s entertainment. (!)

Welcome to the 2019 Glenaeon Concert

Musical training is a more potent instrument than any other, because rhythm and harmony find their way into the inward places of the soul, on which they mightily fasten, imparting grace, and making the soul of him or her who is rightly educated, graceful.

Music is a moral law. It gives soul to the universe, wings to the mind, flight to the imagination, and charm to life.

Music is a higher revelation than philosophy

Without music, life would be a mistake

One good thing about music, when it hits you, you feel no pain.

Music is my religion

We all live in a yellow submarine.

Yes, music means different things to different people, but it means something to everyone.

This year is a special one for us because in 2019 we celebrate 100 years of the educational movement founded and inspired by Dr Rudolf Steiner, and tonight is dedicated to what is known internationally as Waldorf 100.

Exactly one hundred years ago, Dr Steiner was speaking to a small group of people who had been handpicked from across central Europe to start a new school. A catastrophic war had just decimated their countries, and Germany in particular was in ruins. Many people knew that a new form of education was needed, one that would not repeat the mistakes of the past, but would prepare the coming generation for a new and hopefully better world.

This tiny venture began in some sheds behind a cigarette factory in a small and grimy industrial city in regional Germany. There were twelve teachers and a couple of hundred students. One hundred years later there are over 1100 schools on all continents. If you add up all the students who have been educated in these schools over these past 100 years, all the teachers, all the parents and families, the number of people touched by this movement would reach into the millions. Not bad for a movement started by a single individual with no wealth, no power, no political platform. Talk about changing the world, one school at a time, with insight, with wisdom, with conscious and considered action.

Three months ago I attended a Waldorf 100 conference in Bangkok. It was impressive to see teachers and parents from almost every Asian country, all united and inspired by a new vision of education. Many overcame great challenges. I sat next to two teachers from Siberia. Their schools, each as big as ours, are 2000 kilometres apart (Siberia is big!). Each year their Class 5’s get together to put on the Greek Olympics, just as we do here. But to get together, one of the classes travels for 28 hours on the Trans Siberian railway. (And we complain about having to go to Wyong!).

What united them all was one of the great themes of our education: the creative spirit of the universal human being. We express our humanness in a creative response to life and the world, a humanness that in the 21st century, will need to be asserted ever more strongly in the face of so many challenges. As a finale to the program we will hear Scriabin’s great hymn to the creative power of all the arts, and the refreshment they bring. Music is of course a core creative art and it’s a gift that gives so much.

A long time ago, before I ever came to Glenaeon, I taught at Warrah, a Rudolf Steiner school for children with intellectual disabilities, and this story concerns a visit by Gleaneon teachers and student musicians.

There was a young man there named Matthew who was 18 but he spent his life in a wheelchair. He had severe cerebral palsy, he was blind, in fact he had the cognitive function of an 18 month old in an 18 year old body, and so had no speech. He could not raise his arms above his waist. I had seen the physiotherapists working with Matthew, and when he was out of the chair, it was all they could do to get him to kneel and hold his arms in front of himself. The physio’s worked very hard to get him to stretch even the tiniest bit more than his curled up body would allow. But for all his profound challenges, there was something remarkable about Matthew: he had the most beautiful smile, and there was a real sense of a human being, a human spirit trapped in an unyielding body. Everyone who worked with him was touched by this human something.

One night a group of students and teachers from Glenaeon came to perform a concert at Warrah, led by the school’s Music teacher at the time, a very fine musician called Joseph Mani. He conducted a program that included mostly pieces by Mozart and Bach, beautiful pieces with interweaving harmonies for the voices. The voices filled the space with an impressive grandeur. At one quiet moment I heard the sound of movement, and I turned around. There was Matthew in his wheelchair, but with both his arms stretching straight up in the air. His face was filled with the most beautiful, beatific smile. He looked like one of those instruments that register sounds, as though the music was going straight through him. I had never seen him hold his hands higher than his waist, yet here he was, totally ecstatic and upright from the music, something the physio’s had never been able to do. For a brief moment, his human spirit had overcome the unyielding body, all through the power of music. It was a gift brought by the students of Glenaeon, none of whom I think, realized the profound impact they had made.

I hope that you too are uplifted in small way by the music we hear tonight. Thank you for coming, and may each of us take away a spark of the creative, universal human spirit that unites us all. Have a good evening!