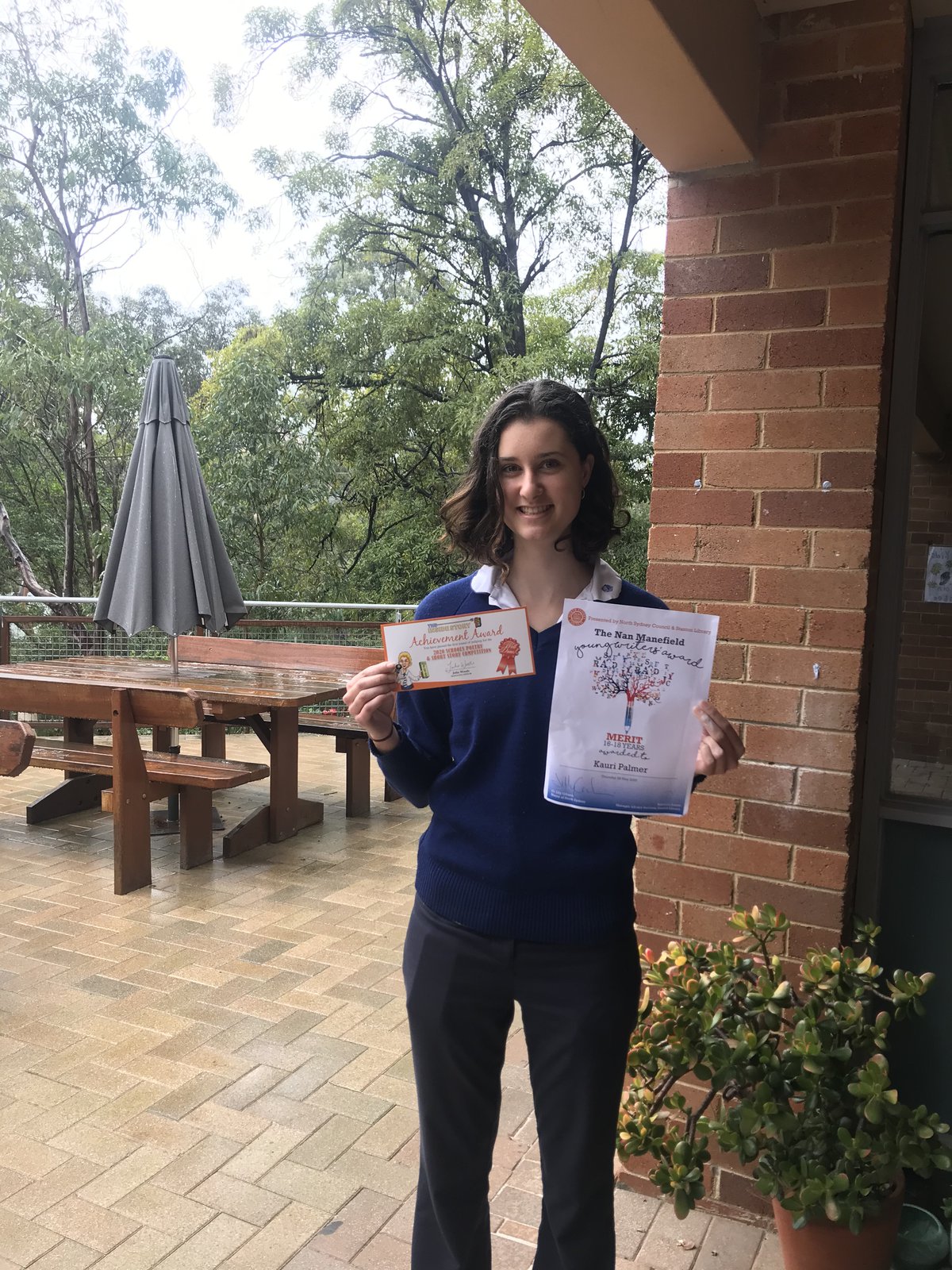 Congratulations go to Year 11 Glenaeon student, Kauri Palmer who has received a merit certificate in the 2020 Nan Manefield Young Writer’s Award, a writing prize overseen by Stanton Library and North Sydney Council for her short story entry titled, “I Remember You”. The competition was judged in five age categories by a panel of professional authors with prizes totalling over $3,000.

The idea for Kauri’s awarded piece first came about during a creative Friday class at Glenaeon, where the task was to take a celebrity/famous person and put them in an unexpected environment. Kauri then wrote up her 278 word competition submission during the coronavirus lockdown.

The same entry has been shortlisted for a next round of judging in another competition but has already been included in a short story collection e-book called “The Inside Story”, which makes Kauri a published author!

As a prize, Kauri will receive an invitation to a Writing Masterclass with award-winning young adult author Will Kostakis.

Can anyone guess the identity of the famous person in Kauri’s short story, and where he is?

A man is standing in silence.

His features are almost familiar. Nothing special, scraggly red hair, watery blue eyes and a stoop in his posture.

The most unusual thing about him is his stance. Unconditionally indifferent to his surroundings, arms weighted by his side, feet perfectly in line, and eyes sucked forwards. But every jolted angle in his body is alive with concentration. A closed circuit of deafening electricity, without a bulb to prove its existence.

His unwavering gaze is focused onto the small painting in front of him. A black hole has opened its maw opposite his gaunt face and frozen his interest. Nothing can sway him from the canvas. Not the sparkling white of the corridors, nor the hundreds of other paintings dripping history and reverence. To him, the humming, bustling conundrum of the crowds is nothing. His stillness creates the impression of a time-lapse taken on a street, the vast buildings the only constant as thousands of cars leave their ghosts behind.

Then, like an ancient glacier finally cracking, he raises a single trembling hand that remembers every brushstroke it ever made. The unusual action itself is enough to draw the awkward attention of a few onlookers, suddenly noticing his once invisible presence.

With steady purpose, he leans forward. The viewers stare, horrified, as he trips the alarm sensor and keeps going, a rolling boulder that can never be stopped. There’s a commotion now, as people struggle to overcome their shock. He can’t hear any of it. Can’t feel anything. Can’t see anything past the tears in his eyes and the painting he brushes with his fingers.

“I remember you,” he whispers to the sunflowers.