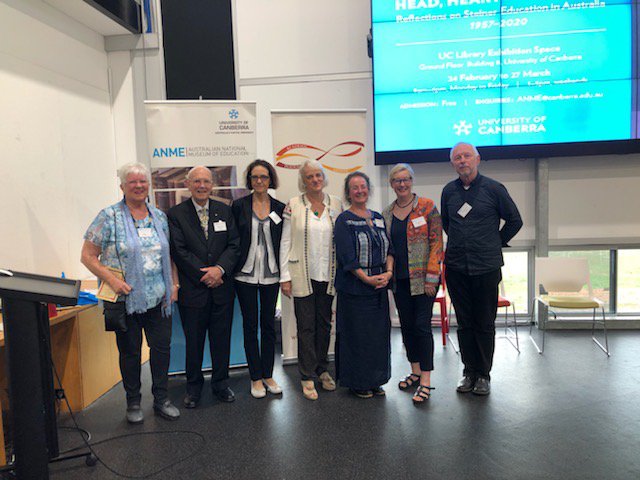 As the first Steiner School established in Australia in 1957, we are delighted to be a part of the Australian National Museum of Education's Head, Heart and Hands: Reflections on Steiner Education in Australia exhibition at the University of Canberra. Our own Glennis Mowday was present at the opening and spoke of Steiner education coming to Australia and the founding of Glenaeon. The founders of Glenaeon are the General Secretary of the Anthroposophical Society, Eric Nicholls and his daughter Marie Nicholls, who also travelled to Canberra as a special guest for the opening of the exhibition. The educational founder of the school was Sylvia Brose AO who began the school with three children one of whom was her neice, Linda St Clair (nee Laycock). Linda also travelled down to Canberra University as a guest for the opening.

The audience in Canberra were very interested in the connection between Walter Burley Griffin, Marion Mahony Griffin and the founding of Glenaeon. Eric Nicholls was an architectural partner in the Griffin firm. Eric and his wife Mollie were keen to start a Steiner school for their children where they lived in Castlecrag. As you might know, the whole Castlecrag suburb was built by the Griffins starting back in 1921.

Linda St Clair and Pam Laycock's father Ronald Laycock supported their Aunt Slyvia Brose by taking over financial administration of the school on a pro bono basis. He was also instrumental in gaining a Federal Government grant for our first science laboratory that is still utlised today in the Lute Drummond building (high school building).

As part of the opening, Virginia Moller, CEO, Steiner Education Australia, gave a fascinating book launch for Thomas Stehlik whose children attended Mount Barker School. The book is titled, 'Waldorf Schools and the History of Steiner Education. An International View of 100 years.'

A huge thank you to Dr Velma McKeachie for inviting Glenaeon to contribute to this special exhibition and to Dr Malcolm Beazley AM as head of the ANME for this initiative.

The exhibition will run until 27 Mar 2020. Download the Flyer If you have any queries about this event please feel free to contact Glennis.