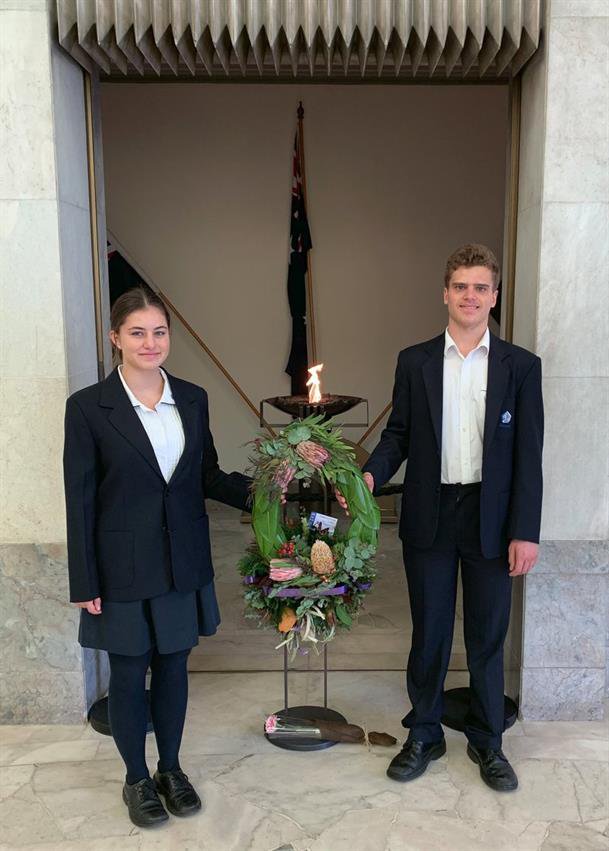 On April 9, 2019 at the ANZAC Memorial at Hyde Park, Glenaeon was selected by the RSL as one of the representative schools to participate in a state-wide remembrance for ANZAC Day.

On April 9, 2019 at the ANZAC Memorial at Hyde Park, Glenaeon was selected by the RSL as one of the representative schools to participate in a state-wide remembrance for ANZAC Day. The memorial was also attended by NSW Governor (and future Governor-General of Australia) David Hurley who spoke of the need to present remembrance of ANZAC Day in practical terms, as it was not just the sacrifice of Australian soldiers, but German, Turkish, New Zealand, French and British men. By remembering all those who made the ultimate sacrifice we recognise a more important contribution to our community- that of unity and humanity. These key aspects must never be forgotten and it was within this message that we as a school were represented by Year 11 students Ruby Vella and Nelson Whitington-Hall, who placed a commemorative wreath in front of the ANZAC Memorial.


Other key aspects of the day’s service was a reflection of the international and local representation of those who answered the call in the Great War. In history classes over the last year, it has been enlightening to see how many students and staff that had forebears involved in these historical events. Again, this service was not a remembrance exclusive to Australia, but as an indicator of our truly multicultural community we have collected stories of soldiers, nurses and officials from Australia, Turkey, Germany, Britain, New Zealand and the United States. This harkens to the Steiner philosophies of service and in the practical sense mentioned at the service, in the activism of today’s youth. All these traits are to be remembered, celebrated and promoted as in an increasingly global world it is this unity that we have exemplified that will strengthen our society and in turn reflect the humanity and benevolence of engaged, aware members of a global community. We would like to thank Mr Andrew Hill, Mr David Alami, Mrs Leonie Gastineau-Hills, Ms Anette Babula and Nelson and Ruby for their organisation, participation and efforts in this admirable endeavour.