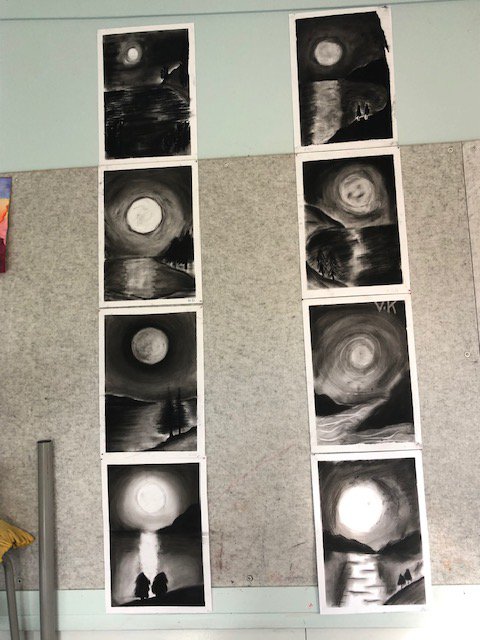 In preparation for the late July night star watch, Class 6 became acquainted with some of the ‘signatures’ of the ‘visible to the naked eye’ planets that we associate with Sun, Moon, Venus, Mercury, Mars, Jupiter and Saturn. How do we experience their movements through the sky each night and day as they progress above the eastern horizon and down to the western horizon? The students adorned themselves in representative colours and created a lively ‘planet dance’ moving at differing speeds and proximity to our home ‘planet earth’.

This main lesson session was book ended with the class singing and playing drums to Kuake, a native American chant and then singing the planet honouring harmonious Oh Sun and Moon.

At dusk the class noted the sun setting in the west and  witnessed the moon rising in the east followed in procession by Jupiter and then Saturn. Using the width of their hand from thumb to ‘pinkie’, they learned how to measure the five degree per hour movement of the moon across the sky.

The 13 stars of the Scorpio constellation with the bright red central star Antares were scrutinised. One must ‘connect the dots’ using imagination to see the larger picture of what humans for centuries have collectively but without collaboration noted as particular forms in the night sky. The overhead Southern Cross constellation graced the night before the class closed the evening singing “Oh Sun and Moon” again.

Oh Sun and Moon, oh wind that breathes.
Oh starlight shine, oh rustling leaves.
Moving, weaving, in and out.
Turning changing all about.
All in one together free,
Bind us all together.