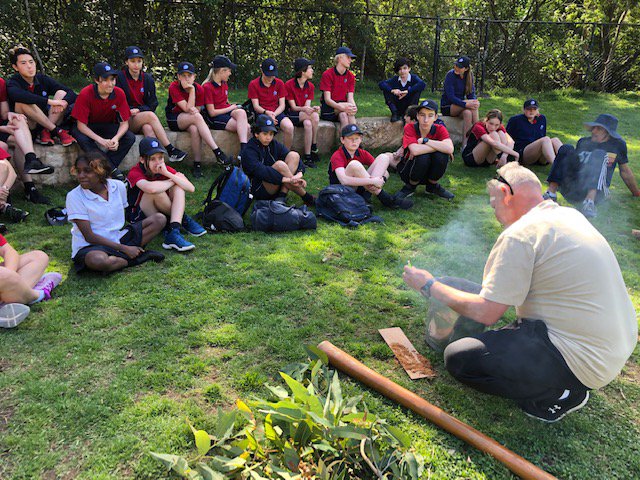 He spoke about and showed the students leaves from a tree adjacent to the sports ground and explained the tree and its significance to indigenous people. The leaves were then integrated into a dance the group learned in a very short time, to which Matthew gave a rhythm and sang while the students followed his rhythm and moving the leaves up and down as to hide their faces while doing grimaces.

Matthew demonstrated different types of boomerangs (some meant to return, others used as weapons to hunt animals). As a very accomplished and celebrated song-man he revealed various simple Indigenous instruments for rhythm as well as the digeridoo. Glenaeon’s own Jamie (Year 7 teacher), himself a good didgeridoo player, played together with Matthew and gave the students an idea of the various ways of playing a digeridoo. Matthew spoke about the close connection to nature and the animal world and how everything Indigenous people did and do has connection to the spiritual world. One very interesting idea was that in Indigenous perspectives, all and everything is interconnected, all actions influence one other, nothing can be seen in isolation. And while we in a modern western context might think the same, our actions tell a very different story. The digeridoo was not just there to play music for example, it can also be used, among other things, to imitate animal sounds and connect to the spirit world of the animals.

The students were encouraged to try out the boomerang and some of the wooden instruments before we all headed to the amphitheatre for a presentation.

Class 3, 4, 5, 6 and the Year 9 cohort and various teachers witnessed Matthew playing the digeridoo and presenting song and dance he had practised with the classes during his time with them. All groups performed different songs and dances and Matthew sang to them in his very intricate and quiet way. We all came away enriched having been part of a culture so relevant to this country yet often so hidden away. It became visible to our students’ eyes, hearts and minds for at least this day, and hopefully many more to come.